I've been diving into a plethora of personal projects as of late and the new year has given me an additional bolt of enthusiasm to begin yet another. :) Without a long-winded narrative as to WHY... after some much needed inspiration from the likes of Kelly Carlin and Joyce van der Lely, I felt the need to nurture my feminine side a bit more and The Goddess Project was born.

Basically, for the next I don't know how long, I will choose a "goddess" from anywhere and everywhere around the globe - ancient, modern, well-known and obscure - and give her some of my attention. I am guessing that (depending on who and what I find) the posts for each will be unique in and of themselves but I will attempt to give at least some "spheres of influence" or symbols about each female and as much background on her as I can muster. Oh, and I'll depict her in art. The idea is to honor the feminine using both my analytical researcher and my rekindled artistic muse. So, without further babble...

An Italian crone, Befana is called upon for her wisdom and guidance. She is also known for overcoming evil and driving out the darkness of winter. Symbols include a broom, horns and protection poppets. Notably: the famed kitchen witch.

From what I can gather, the legend of Bafana lies within Christian folklore with her offering her modest cottage to the three Magi to rest before continuing their quest to find the Christ child. After initially declining the Magi's invitation to join them, Befana decided she also wanted to bring gifts to the new born king. She set off on her broom to find the Magi and the child but was unable to find them that night. So... in certain parts of Italy each year, on the night before the Epiphany (January 6) Befana rides her broom in search of the Christ child - stopping at each home and leaving candy and small gifts for good children and coal for the bad. Sound familiar to anyone? Since Befana quite likely has her roots in the pre-Christian pagan tradition, from the Sabine/Roman goddess named Strenia, she predates St. Nicholas or Santa Claus by a long shot. 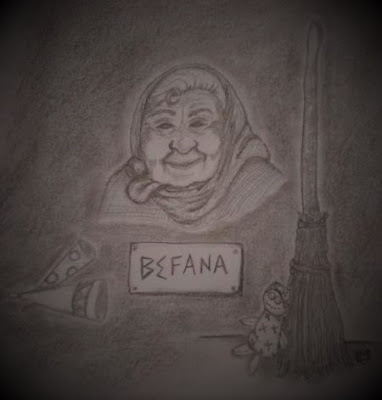 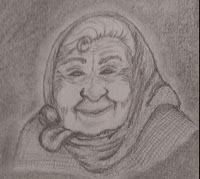 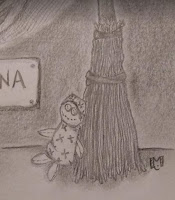 at January 04, 2020
Email ThisBlogThis!Share to TwitterShare to FacebookShare to Pinterest
Labels: Art, The Goddess Project